Webhooks can be used to update your Apilio data and evaluate your Logiblocks from other apps and services, for example: iOS shortcuts (Siri), Tasker, Zapier, and many more.

In this post we’ll see how we can use these handy URLs to update your data in Apilio from any third party service or apps that can handle webhooks.

These urls are always displayed in the “show” view for any element. 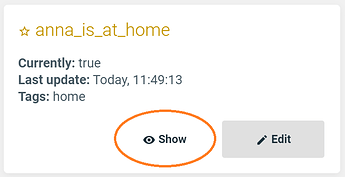 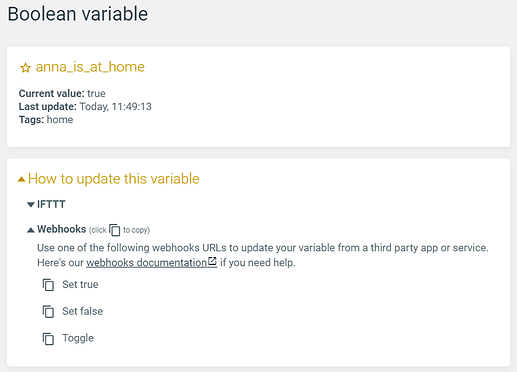 String variables can be cleared via webhooks (delete the data they store) or you can set them to a different value. You’ll need to append &value=new_value to the end of the URL, where “new_value” is the new string you’d like to update the variable to.

Numeric variables can be set via webhooks and you can also do a couple of mathematical operations with them: add a number to the current data stored, or subtract a number from the value. In all these three cases, you’ll need to append &value=some_value at the end, where some_value is the number you wish to update the numeric variable to, or that you wish to add/subtract.

Evaluate a Logicblock via webhooks

Activate or deactivate a Logicblock via webhooks

We’ve added two new capabilities via webhooks, so you can automate if you wish to deactivate a specific logicblock.

With our recent updated webhooks, you’ll be able to use these to update variables and run Logiblocks without leaving Apilio! Using webhook actions to update Apilio elements accomplishes two goals: Remove unnecessary delays, hence increasing the speed of your automations Reduce the amount of IFTTT applets you have that are Apilio <> Apilio so you can simplify things. How to update a variable from a Logicblock As a result of a Logiblock, you might want to update an Apilio variable. Instead of …

Tasker is an Android app that can perform tasks based on conditions. Much like Apilio, it lets you automate logic based on what’s going on on your phone: where you are, if you have received an SMS, if the phone is in silent mode, … It’s not a free app, but it has lots of fans out there! [Using Apilio and Tasker for Android] In short: Tasker lets you specify some conditions and, if the are met, you can run some actions. One of the types of actions Tasker has is to call a URL, so we will use t…

1 Like
How to renew your webhooks secret key in Apilio
New (old?) in Apilio: webhooks are back!
REST API Documentation
Action to turn on/off other applets
New in Apilio: webhook actions!
Presence awareness for families - Part I: knowing who is at home
★ Apilio's help guides: all our documentation ★
How to use Tasker and Apilio via webhooks
How to update Apilio variables or run Logicblocks without using IFTTT
How to setup numeric conditions in Apilio
RE: Inside temp lower then outside temp set lights to green
How do I update Apilio from Arduino
Ways to trigger a Logicblock
How to setup string conditions in Apilio
Can I connect Device XYZ with Apilio?
DanT 4 March 2021 11:12 #2

Please could we add multiply and divide as well as add and subtract to the numeric variable featues?

Would it be possible to retrieve the status of a condition (true/false) via webhook? That can be very useful for Tuya-based conditions.

We are working on an update and extension to the REST API (https://documenter.getpostman.com/view/7602053/S1TSZeSA?version=latest).
Can you elaborate from which system you would want to get that state information?

I have a Siri shortcut which runs when I say “What’s the status of the garage door?”

I have currently implemented it through a logicblock which checks the status of the door (positive if closed, negative if open) 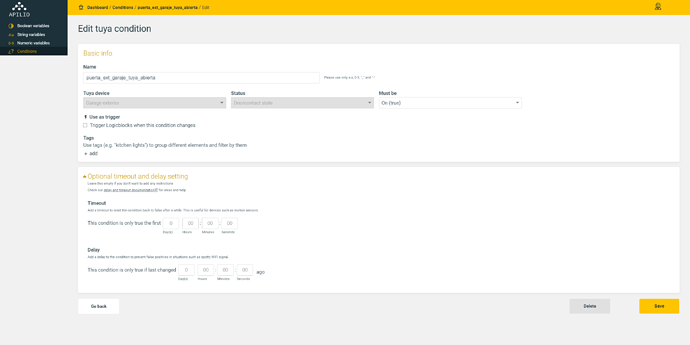 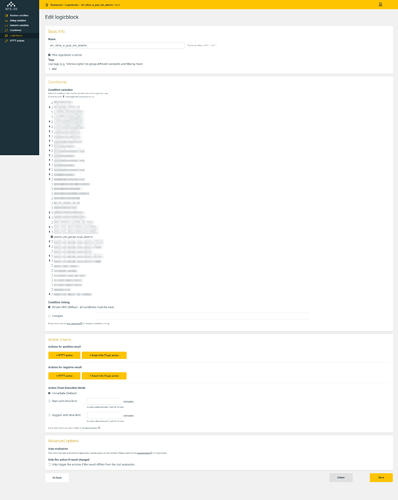 My Siri shortcut calls that logicblock through a webhook, parses the JSON result, and shows the result via notification and also voice (in case I am asking via HomePod or CarPlay)

Thanks for this @teknofilo! Amazing!

But Dropbox is reporting the link as deleted?

Try again, I deleted the file by misstake

Impressive stuff - thanks for sharing!

I never took the time to check out iOS Shortcuts in details, and I must say it’s way more powerful than expected.

I am not very familiar with it, so I had to “google” every line of code. Being used to other languages like PHP, I find it a little bit complicated.