How to setup string conditions in Apilio

Apilio allows you to store text so you can create conditions that use this information. For example, you could store tomorrow’s weather forecast in a string variable and react differently, perhaps with a special alert or turning on the heater earlier than usual, if there is rain or snow expected the following day.

Create a string variable and update it

You can create a string variable going to https://app.apilio.com/string_variables and click/tap on “new variable”. You can add a name, the current value that you wish to store in the string, and add tags if you wish to keep things grouped and organised.

String variables can be updated via webhooks or IFTTT.

String variables are used to store bits of text, such as “Green”, “Snow”, or “Closed”. Any service that sends you text for you to react on, you could store in a string variable. For example, you might use a weather service that sends you a short description of the weather tomorrow, and this could be either: Snow, Rain, Cloudy, Clear. 2 options for managing string variables from IFTTT [image] With IFTTT, you can use the following two actions when creating your own applet from scratch: Updat…

Webhooks can be used to update your Apilio data and evaluate your Logiblocks from other apps and services, for example: iOS shortcuts (Siri), Tasker, Zapier, and many more. In this post we’ll see how we can use these handy URLs to update your data in Apilio from any third party service or apps that can handle webhooks. Webhooks URLs are in the show view for any variable or Logicblock These urls are always displayed in the “show” view for any element. [image] Update boolean variables via… 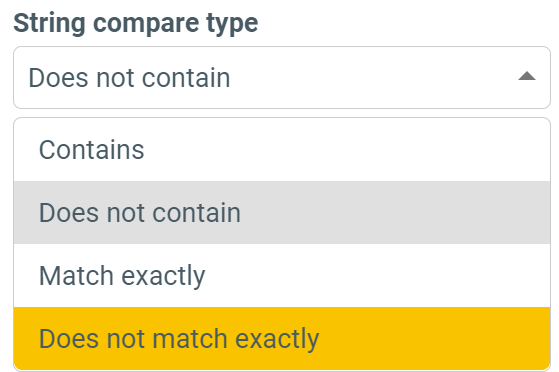 We are going to use the variable Weather for a few examples. This variable is currently set to “Heavy rain” by the weather service in IFTTT. When creating a string condition, you’ll be able to set a string to compare your variable against. The string is a constant value that will be compared against your variable. The variable is usually kept updated with an external service that sends information to Apilio.

A couple of important notes to remember is that:

This comparison is helpful if you want to only get a condition to be true when the string is an exact match of another string.

Does not match exactly

This comparison is helpful when you want to have a condition that is always true except in one case: when the string and the variable are exactly the same, this is the only case when the comparison is false. It will be true in any other case.