How to update a boolean variable via IFTTT

Apilio is natively integrated with IFTTT so you can combine almost 700 different brands of devices and services in your home routines. Apilio is a fantastic complement for IFTTT because you can create routines that combine multiple conditions, actions and delays.

For example, you could have your kitchen light turn on automatically when you arrive, but only if you are the first one home and it is nighttime already.

Why do we need Variables?

To allow you to use your devices with Apilio and build Conditions that use those devices, IFTTT can send event information over to Apilio, like a light bulb being turned on, or the temperature being over 25ºC. Apilio will then store this information about your devices in its “memory” in the form of Variables.

The simplest Variable is our Boolean Variable, which is what we use to store information that can be true/false, yes/no, on/off… that means, it’s great to store the status of a myriad of devices like light bulbs, if you are in a location or not, if the power is on or not, etc.

Examples of a Boolean Variable are:

With IFTTT, you can use the following two actions when creating your own applet from scratch:

Let’s have a look at a more detailed example.

Setting up the “at_home” variable from scratch

We want to create a Variable called “at_home” that is set to true when your phone connects to your home wifi, and it set to false when your phone disconnects. This is great for energy-saving automations that should only run when you are home, or for home security routines when you are away. Follow the steps to set this variable up in Apilio: 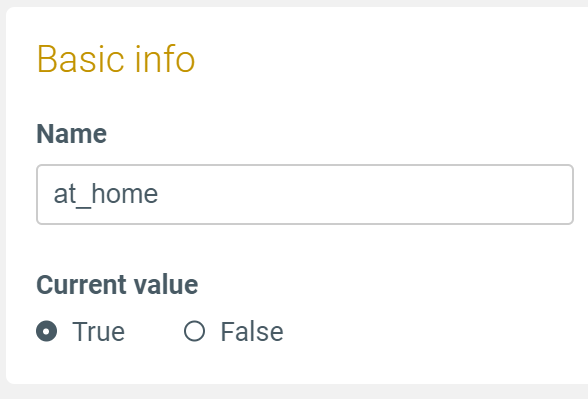 We are going to first setup an applet to make this Variable true whenever your phone connects to your WiFi. 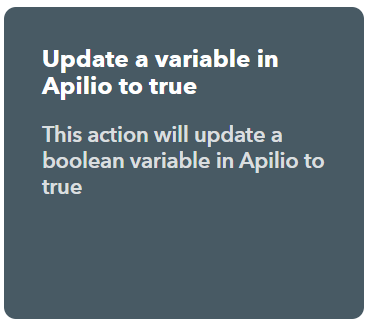 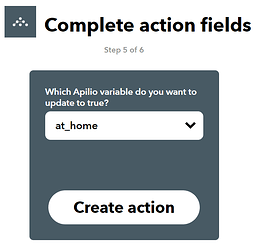 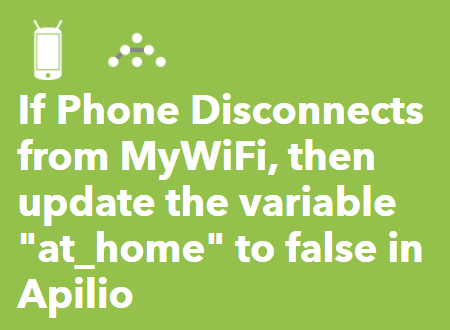 Have a look at these examples with the other types of variables:

2 Likes
How to update a numeric variable via IFTTT
Newbie video - How to setup a variable
How to connect Apilio and IFTTT
★ Apilio's help guides: all our documentation ★
Operate action night time only
Start monitoring Apilio's activity with our new event logs
How conditions applied to variables work in detail
How to evaluate logicblocks and trigger actions with IFTTT
How to update a string variable via IFTTT
ptngan 27 August 2020 14:57 #4

I’ve created a Boolean variable, but am not seeing the ‘Set True’, ‘Set False’, or ‘Toggle’. I must be missing a step but can’t figure it out.
Here is what I see

Use one of the following actions on the IFTTT Apilio Service to update a boolean variable:

Hi @ptngan, welcome to the Community! I’ve moved your question here as it is relevant to this topic

You will find the “set true” “set false” and “toggle” actions in IFTTT:

Let me know if this helps, thank you

Anna, thanks for the quick reply I think I understand now, I was trying to create a webhook, but I think now I can link ifttt and apilio with the Apilio service. Will do more investigation and try it out.

Thanks for your help.

Happy to help! We are natively integrated with IFTTT, so you can use the Apilio channel and not Webhooks

Let us know how you are getting on with your setup.

Got it working, thanks for all your help. Great community.

Thank you, we appreciate the feedback