Back in May we launched the first part of our integration with Tuya, but that release only included actions and you could not setup conditions with your Tuya devices…until today! 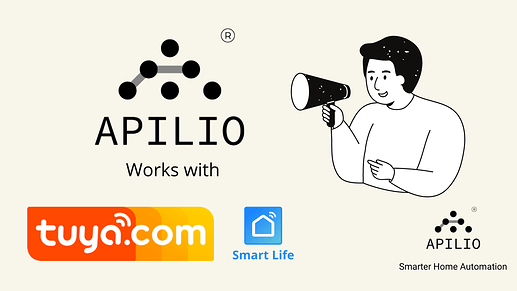 What’s included in this release

With this new release, you’ll now be able to create: 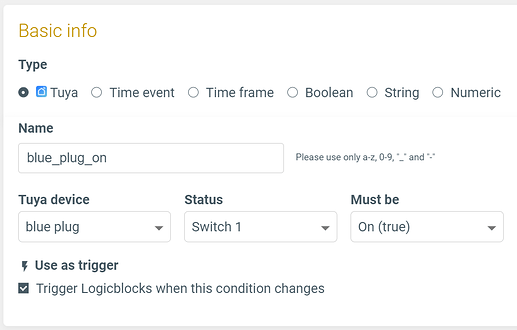 What’s not included in this release

During our tests we’ve learned that Tuya devices can be configured in many, many different ways. We are displaying the statuses that can be used in Conditions that the device manufacturer included during the development of the device. This means that you might be missing some statuses for some devices. If you think there is something wrong with your devices, you can always reach out to us and we’ll have a look at your config.

We have created a thread to curate a list of well-configured devices, so you’ll know beforehand how these devices are operating. You can also contribute to expanding the list letting us know about your current devices.

Tell us what you’d like to see next to control your home automations just how you want it.

We want to introduce a new concept of devices to Apilio, that will allow you to check the status of different devices and variables in one place. Maybe you’d like us to focus on expanding the Tuya actions first, or on a different integration? We are all

The whole Apilio team would like to thank our families and partners for enduring weeks of chaotic Tuya testing at our homes, during which a seemingly unending stream of new test Tuya devices were added to our dwellings, where all existing Logicblocks were disabled or modified beyond recognition, and some lights and switches were turning on and off at unexpected times of the day, all in the name of Quality Assessment

Thanks for this! I will give it a try in hopes that the Tuya triggers are more reliable here than they were with IFTTT.

Hi @rached! We are super happy with the fast response times

! Let us know how your tests go

We are here and happy to help!

Great job on the Tuya conditions. As a total newbie, and after discovering Apilio only a couple days ago, I probably take for granted something that already required a lot of sweat, blood, and tears.
Nonetheless, my request is to be able to retrieve and to use the value retrieved in the Tuya condition. That means in the event:
„Tuya condition ‘condition_name’ changed. The status ‘Tuya variable’ for device ‘Tuya device 1’ was updated to 100.0 by Tuya.“ I would like to be able to recover or to use the value „100.0“.
Ideally, the value „100.0“ could be passed on to IFTTT as one of the variables in the related logicblock.

Great input! This is a known limitation and we will consider offering more options going forward.

I just noticed this history item:

I notice that for some temperature sensors - those that record fractions of a degree of accuracy - they seem to return an integer of the value multiplied by 100, rather than a proper decimal value. If this isn’t a decimal bug in Apilio, the ability to scale these values would be extremely useful in any conditions we get to create.

That would also be awesome!

Those are probably two different types of devices, right?
Because the Tuya platform is very open and covers a huge range of device types and different implementations, we only see/understand what the API delivers.
So in this case, it is probably that one device is better implemented than the other. But we are thinking about ways to “fix” this on our side with some creative methods.

Those are probably two different types of devices, right?

They’re both Zigbee devices via a Tuya hub, but one has an LCD display and the other does not. The device with the display has the 2 decimal places precision.