Enable/disable your logic: control which logicblocks are actively running!

Apilio didn’t have a straight-forward way to choose which logicblock was active… until today! You can now control which of your logicblocks are active or inactive, without having to delete them or modify them in any way. Think about this as a handy on/off switch for your logicblocks! 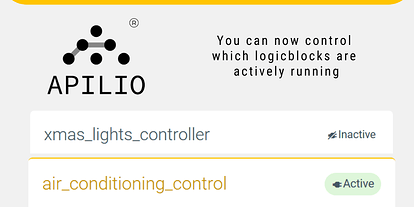 This is something we wanted to build because it adds great flexibility when you are setting things up in Apilio, and it is also something that had been requested here in the forum and via our support chat!

See at a glance if a logicblock is active or not

If you log back into Apilio now, you’ll see on your logicblock list a status indicator with text and a little electric plug icon. Logicblocks currently active have a green active indicator and a top bar, so you can find them faster on your screen.

For example, keep your Christmas lights automation saved for next year, when it is time to reconnect all of those cool Christmas tree lights, smart switches, dancing Santas and glowing giant candy canes that are currently quietly sleeping in boxes until next year.

When you edit the logicblock, the active/inactive status is displayed in the basic info section.

How to make your logicblock active or inactive

When you create a new logicblock from scratch, or if you hit ’ edit’ on an existing one, you’ll see a checkbox to select whether you’d like your logicblock to be active or not. If you haven’t used all of the logicblocks included in your plan, the checkbox will be selected as active as a default. 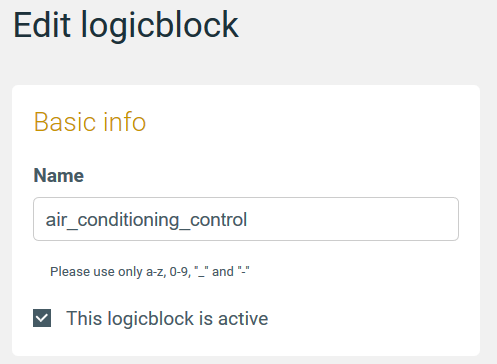 When you hit ‘save’, you’ll see in the saved screen the confirmation that your logicblock is currently active: 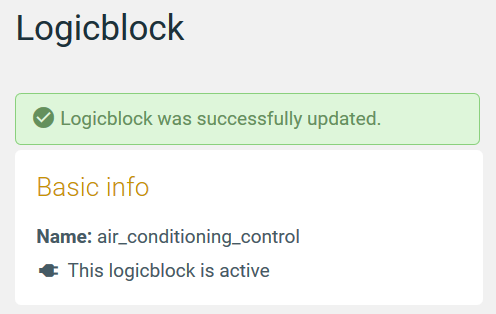 Or if you create it inactive from the start, or make an active logiblock inactive, the opposite message will display:

What can you do with this?

For example, what if you wanted to test two different ideas for automating some special lights in the chicken coop? You might want to use a sensor that checks if the door is closed … or maybe use a pressure sensor to detect if there is a chicken in the area where the light should be on? You can keep both logicblocks as you experiment, so you can pick up right were you left off your last test.