Numeric Conditions do not trigger Logicblock

I’ve got a (relatively) simple Logicblock created to control a window fan. The temperature variables are updated pretty frequently (2-3 per minute) and are used in Numeric Conditions that should (in theory) trigger my logic block. However, whenever one of the variables change and a condition becomes true (or false), nothing seems to happen. The Logicblock functions as expected when tested but never evaluates on it’s own.

The conditions are set as trigger conditions and I’ve tried flipping the expression (I’m only using greater than and less than) as I read somewhere that it only triggers based on the first variable changing (Is this still true?). I’m using the complex condition linking with the below expression (Does this matter?).

My current brute force workaround is using a cron time event that runs every minute but this isn’t ideal. Am I missing something somewhere? Any help would be greatly appreciated.

First thing I would check is that the condition shows events in the event log. Otherwise something is not working. If you share a screenshot of the configuration of the condition, that might also help.

I would also try to create a very simple logicblock with that single trigger condition, and check if the logicblock gets ever executed. If it does, there is a problem with your complex condition linking. 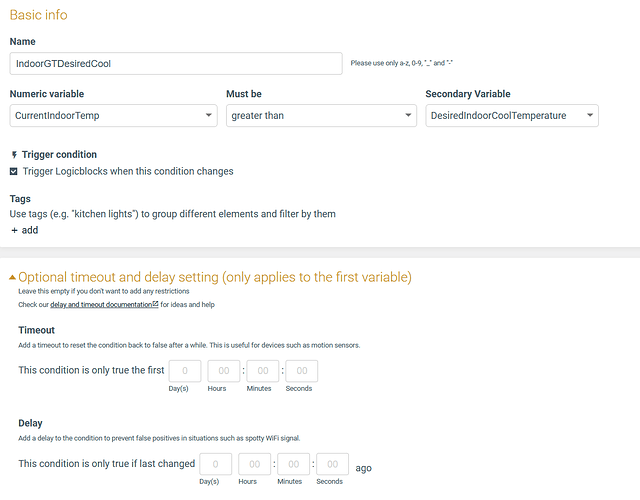 image1185×925 60 KB
This is one of the conditions I am using. The others are basically identical. I checked the event log on the dashboard and there is nothing for any of the conditions including the time event, though that one is triggering the Logicblock.

I also created a Logicblock with only the above condition set to simple AND; it also does not trigger.

After some digging in the documentation, it would appear that conditions are not recorded in the event log at all

I think I have found part of, if not the entire, problem. I created a simple Logicblock shown below.

If this was controlling, say, a fan with a single on/off button toggle (like I’m attempting to do) the fan is now on when it’s supposed to be off and vice versa. The obvious fix to this particular issue is the Only Fire Action if Result Changed box, causing the fan to never shut off when it’s supposed to, but I digress.

I believe this, combined with the fact that I am using 4 separate conditions for my Logicblock, each with constantly changing variables, is what’s causing my issue. If I am grossly misunderstanding something or there is a solution to this, please let me know

I think I have a solution:

Repeat this for all conditions.

That doesn’t seem to have any effect on the logicblock; the above issue still occurs.
New logicblock:

Flipping the second condition as shown below makes it function normally but it’s a workaround that shouldn’t be needed.

Well it’s not pretty but it works. I’ll find out tonight if it does anything weird. I’d really like to see this fixed as this is entirely unnecessary

Yes, you are right, I’ve made some tests and it looks like conditions with two variables only trigger logicblock executions when the first variable changes. Your idea of flipping the second condition does the trick.

I think @pebneter may want to change that.

Yes, unfortunately that is correct for now. We have identified it as something we want to fix!

Yes, unfortunately that is correct for now. We have identified it as something we want to fix!

I figured this was the case as I thought I read that in an old forum post. Is this also the reason for the issue I encountered when the first variable wasn’t triggering the logicblock if the second variable changed the state of the condition?

Yes, changes in the second variable never trigger a re-evaluation of a condition (hope to be able to change this sometime).