How to override an action for several hours

I have implemented a securty system that, when any of my Netatmo security cameras detect a person around my house, I get a notification in my mobile and, if this happens after sunset, outside lights are turned on for a few minutes.

Sometimes I plan to be in the garden for some hours and I don’t want notifications to arrive or lights to turn on/off everytime a person (myself or my family) is seen.

Today I have improved that system with the possibility to turn off the alarm for 1, 2, 3, 4 or 6 hours so that I don’t have to reactivate the alarm myself, which is something I tend to forget.

In order for “minutes_left_before_alarm_is_back_on” to diminish as time goes by, I have created a new condition called “every_5_minutes” (cada_5_minutos) with a cron condition “*/5 * * * *” (this means “At every 5th minute”). This condition triggers a logicblock which triggers an IFTTT action which performs a mathematical operation: substract 5 to “minutes_left_before_alarm_is_back_on”. 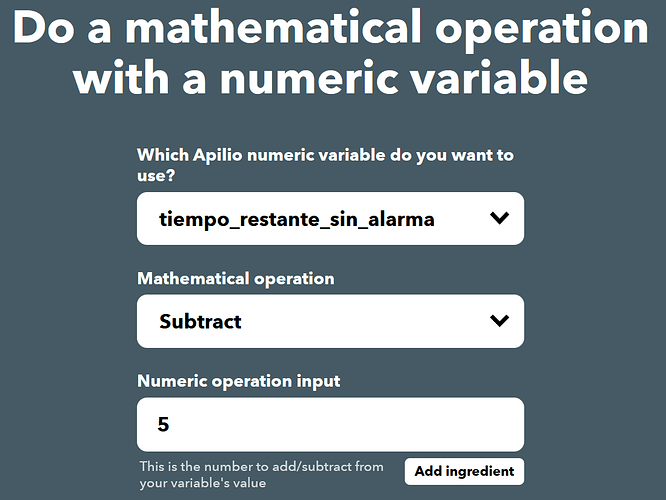 Note: OK, you are right, it will reach 0 after 117 minutes, not 120 minutes. I don’t care. More precission could be achieved by creating a cron “at every minute” and substracting 1. Or even working with seconds instead of minutes and creating a cron “at every 10th second”, but I want to be nice with IFTTT and Apilio and avoid flooding with events.

Although I am using this for an alarm, it could be applied to any other action like lights turning on/off when motion is detected/not detected.

I am looking to do exactly the same but turning my lights-timeout-after-3-mins off for an hour at a time (over dinner for example)! I was actually planning on using a condition with a 1hr timeout or a 60-min delayed action chain but I’m going to wait for some new variable/logicblock actions to be released as my lights automation logic is getting a bit too complicated for my brain

Until now, I was using a 1 hour snooze with the delayed action option, which can be 60 mins maximum. That’s not enough for me because, if I am out in the garden for a barbecue (like this weekend), I will probably be there for 3-4 hours.

This new method gives me more flexibility so I have implemented 1, 2, 3, 4 and 6 hours snooze periods, as well as ‘forever’, and all of them can be activated via Alexa routines (“Alexa, snooze garden alarms for 2 hours”).

Sounds like we also need a longer delay then @pebneter and @Anna ! I really like your use of the Alexa voice commands here Luis; I’ve been getting increasingly fed up with voice commands - the initial enthusiasm has very definitely worn off - but if they provide additiona value, like this, then I’m still happy to use them.

Hi @teknofilo,
you should revisit the action configuration today and hopefully be delighted to see that the max is now 10 hours instead of 1!

With a delayed execution, the alarm would turn off after the first 2 hours period.