I’d like to do the following two things and can’t figure out how to do it. Maybe you guys here could help me?

Thanks for any help and happy “Apilio”…

If the plug is a Tuya device, define a condition that triggers when the device switches on, and another that triggers when it switches off. On switch on, implement a logicblock that sets a Boolean variable “plug_on” to TRUE; on switch off, trigger a second logicblock that sets the same variable to FALSE. You can set variables via a webhook call (come on Apilio–implement setting them direct soon!)–look at the “how to update this variable” in the variable definition to copy the required code).
If you then create a further condition to test if plug_on is TRUE, you can act on this as required–if you only want this to action events within a certain time window, create another condition that defines this time window and only action events if both conditions are true.

I don’t have a tado system, but looking at the IFTTT documentation for this, you can trigger IFTTT events when the system goes into away mode or home mode:

Create two IFTTT applets, one triggered when you go into each mode, and in the THEN definitions set an Apilio Boolean variable “away_mode” to TRUE or FALSE. You can then define a condition in Apilio to test the status of this variable, and act accordingly.

The other way of dealing with the smart plug is also to act on device status switching from IFTTT rather than from Apilio, so if you can get an ON/OFF trigger from this device with IFTTT, you can define an applet for each of ON and OFF, and use the THEN action to set an Apilio Boolean variable TRUE or FALSE from there. This would have the advantage of not needing to use slightly obscure webhook calls, but depends on what IFTTT support you have for your plug,

I have a tado smart thermostat, and I use it to control presence at home. There is no direct integration with Apilio, so you need to use IFTTT.

I have two IFTTT applets: 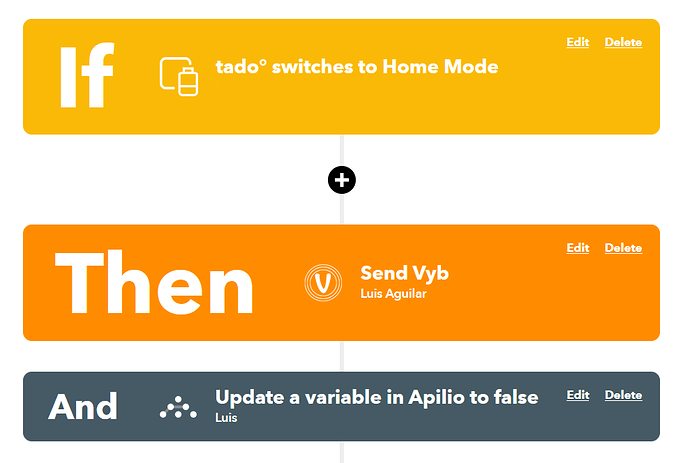 (you can ignore Vybit, that is used to receive a notification)

In Apilio, I have 2 conditions based on that variable:

Now you can use those 2 conditions in your logicblocks easily to execute Apilio or IFTTT actions.

Thank you guys for the quick help, but I already knew that. Maybe I did not explain it good enough, sorry for that!

Same Scenario goes with the power plug: I do not want to act on “if mystrom device switches to on”, I would like to check the status and act upon it. For example: If the wifi plug which powers my home entertainment system IS on, then switch off a specific hue light.

Many thanks for all your help!

What I would like to check is if tado already is in away mode rather than act upon the trigger “if tado switches to away mode”.

Have a look at what @teknofilo and I wrote. As suggested by each of us, the triggers are only used to set the status of Apilio variables. You then can read these at any time, not just when the status changes, and can act on them as required.

I already explained that. Update a boolean variable in Apilio whenever Tado switches via IFTTT. That variable will obviously keep its value until next change. Check that boolean variable via a condition whenever you need to execute an action based on Tado being away or home.

Thanks, now I understand