OK so this is my current favourite use case. It’s been discussed extensively on the forum but I’ve just implemented it with Apilio and Tuya only so no need for IFTTT! It works much quicker and slicker with the Tuya kit - I really recommend the zigbee devices as they are super quick (see my rather too proud video here).

I have set up one trigger condition called kitchen-movement, which triggers everytime the PIR sensor fires. CRITICALLY, I have added a 5 minute Timeout to the condition - thanks @Anna

- which will set it back to false after 5 minutes. This is important for the continued detection of motion to avoid the lights going off when someone is in the kitchen. 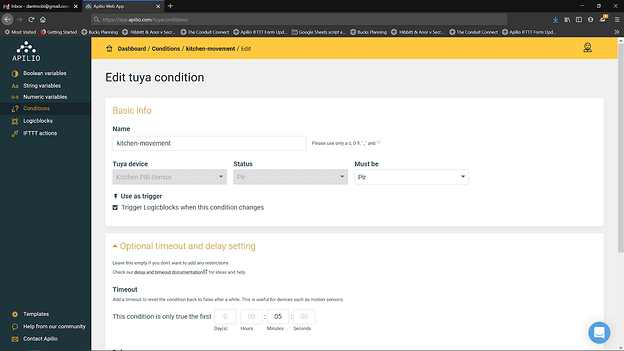 I have set up a second condition (not a trigger condition) called kitchen-light-level which determines if the light level in the kitchen is below 60 Lux. This is important to me as it’s often dark in our kitchen during the day. 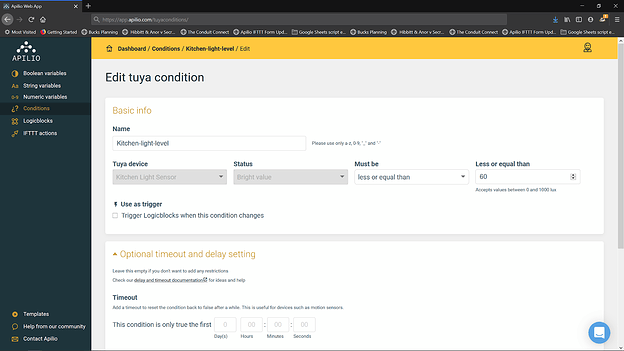 I then add two logicblocks, one to turn on lights and one to turn off lights if there is no motion detected within the 5 minute condition timeout window.

The first Logicblock is straightforward, using the positive action chain to switch on two Tuya light routines. The kitchen-movement condition triggers the logicblock evaluation which AND checks the light level is below 60 Lux. If the AND is true then the Tuya Kitchen Table Group:ON and Kitchen Work Group:ON are switched on. 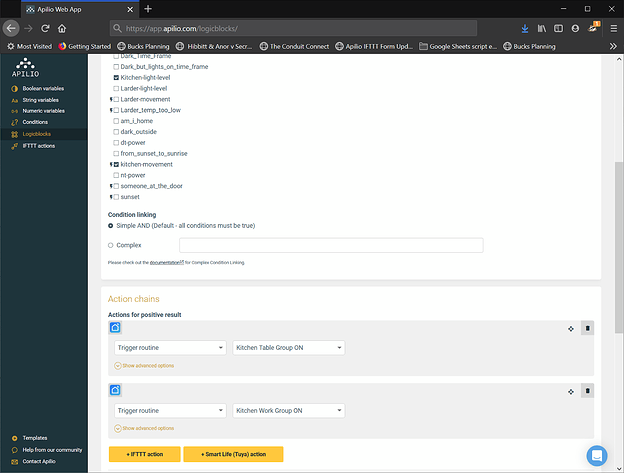 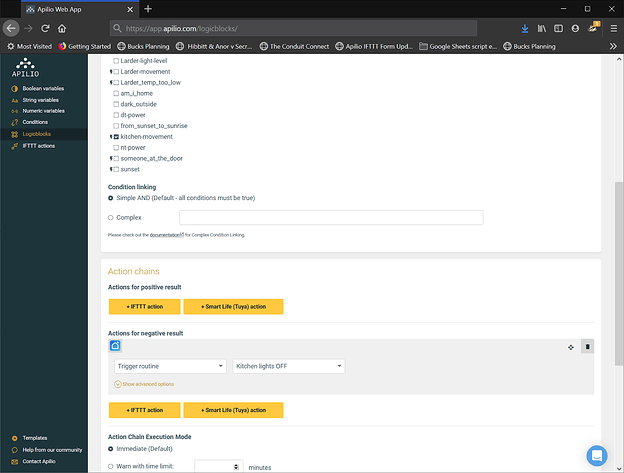 So the principle is that a change in the trigger condition causes an evaluation of two logicblocks at the same time.

The timeout function is so important as it is the mechanism that turns the trigger condition to false, thereby starting the negative action chains.

All clear? Let me know if you have any questions!

2 Likes
Auto lights on/off (with "no movement" event from PIR sensor) using 2 x PIR sensors, a light level sensor and 3 minute of no movement delay before lights out
Setting up an override feature for PIR sensors
DanT 30 January 2021 15:38 #2

I just added a second PIR sensor, at the opposite end of the kitchen, with identical conditions to the first and am using the following complex (

so now I have found out I really need to make the timeout configurable. At mealtimes, socialtimes, sometimes it needs to be 20mins whereeas other times the timeout only needs to be 2mins. Would be great to be able to use a numeric variable as the input to timeout (and delays probably) which could be updated either using time conditions or say a webhooks button to get the timeout boost when required for an hour or so (also depending on time of day) or until the boost button is switched off. What do you think?

With the current feature set, you can setup multiple conditions for the delay levels and then multiple logicblocks with timeframe settings. That way you’d have a changing behaviour throughout the day.